It is customary to see Bresson’s third feature, Diary of a Country Priest, as the starting point of his true style. While there are various counterarguments to this, in several senses it is important, notably in the complete jettisoning of professional actors so he could use non-professionals as ‘models’. It is also true that this encounter with the French Catholic author, George Bernanos, is of deep importance for Bresson in terms of the themes and ideas that he treats.

Astonishingly perhaps, it seems that he also drew from Bernanos not just themes but one of his key aesthetic ideas – or if he had worked it out before reading Bernanos, he found it beautifully articulated there. I mean the importance of the voice. Later in his career Bresson was said to cast models by voice. Seeing them in person remained necessary as well, but the sound of the voice was vital.

So, consider this passage from Bernanos’ novel: “I am not good at reading faces, a ‘physiognomist’ you might say, but I had a good memory for voices; I never forget them; I love them. A blind man, undistracted by anything, must learn a great deal from voices.” That is Bernanos’ idea surfacing in the priest’s diary, and the idea then surfaces in Bresson’s ‘Notes on the Cinematographer’: “Telephone. His voice makes him visible.” This is part of a larger aesthetic of sound – for example: “The eye (in general) superficial, the ear profound and inventive. A locomotive’s whistle imprints in us a whole railway station.” Which takes us back to Bernanos: the priest’s reflection on voices is caused by hearing that of Olivier, the nephew of the count. His first (and only) appearance is signalled by the sound of his motorbike. Bernanos cleverly uses a description of this noise to create an impression of Olivier, before he speaks, before he is even seen. “This growling which rose and fell according to the gusts of the wind, or bends in the road. . .The sound of the motor was like a savage cry, imperious, threatening, desperate . . .” The scene is closely reproduced in the film. First the priest, walking to the station on the country road, becomes aware of the noise of a motorbike:

Then it rises in volume while we see only the back of the priest’s head, our attention being channelled to the sound.

Then we hear the motorbike coming to a halt, cue the site of Olivier, a free spirit offering the priest a lift, who serves in the Foreign Legion and who calls the priest his friend. The Legion’s motto according to Olivier is that of the priest’s – ‘Tout ou rien / all or nothing.’ 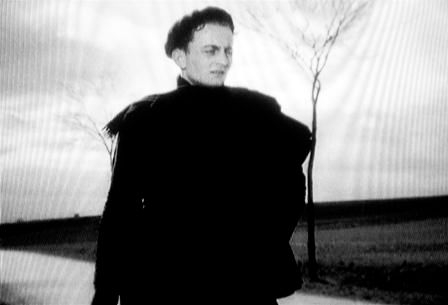 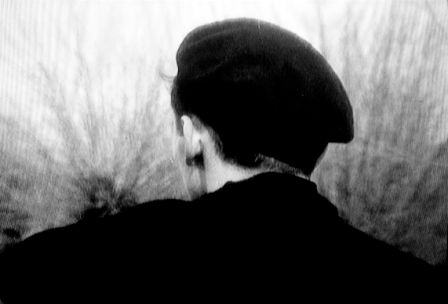 an ear an ear 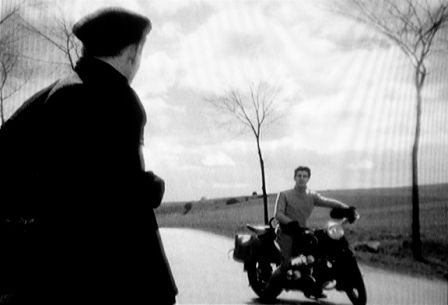